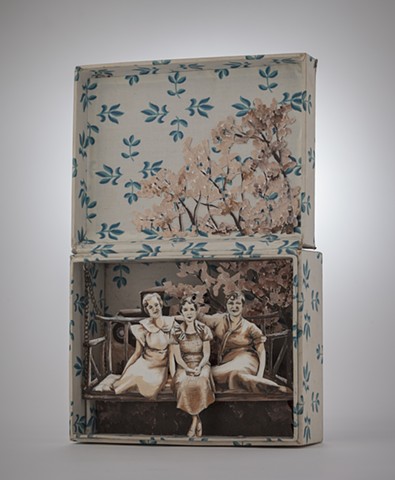 I have always been fascinated by the idea of “playing dress-up.” Putting on different clothes can instantly transform us into someone extraordinary. Even when we are no longer children, every morning we put on clothes that change us into the personality that we will be for the day: teacher, CEO, barista. This fascination with clothing and how it influences how we interact with our environments has led to an interest in historical fashions, their purpose, utility, and what they say about traditional gender roles. Many of the reference images I use for my artworks are photos from my own family, namely my grandmothers and great-grandmothers, rooting the pieces in my own personal history, as well as in a more general historical context. I maintain a sense of play by saturating these black and white images with bright colors. Other pieces include my family and friends in the works themselves, as I combine painting and photography to transform them from everyday people into something a little unexpected.

Within the past several years, I have transitioned from making two-dimensional paintings on canvas, to making three dimensional works combining painting, wire, wood, and other objects inside found boxes, as well as combining painted pieces with live figures.

The two-dimensional cut outs in the “shadow box” pieces and the photographs reference vintage paper dolls, where a figure’s clothing- and personality- could be changed with the ease of folding down a tab. I assemble the pieces inside three-dimensional boxes to produce a sense of theatricality, much like the toy paper theaters from the early 19th century. Captured within these little “stages”, the figures become actors in costume, caught in mid scene. I also want to create in the viewer a desire to peek around in the space, like they would with an especially realistic doll house, marveling at the details and the little hidden objects. Constructing the pieces in found jewelry, cigar, and other boxes allows them to be closed up and put on a shelf, hiding the tiny world trapped inside. In the photographed pieces, models become paper dolls themselves, as I superimpose a new personality on to them through forced perspective. These multimedia pieces stem directly from my many years of creating more traditional paintings on canvas, which were inspired by family photographs, as well as vintage ads and movies.